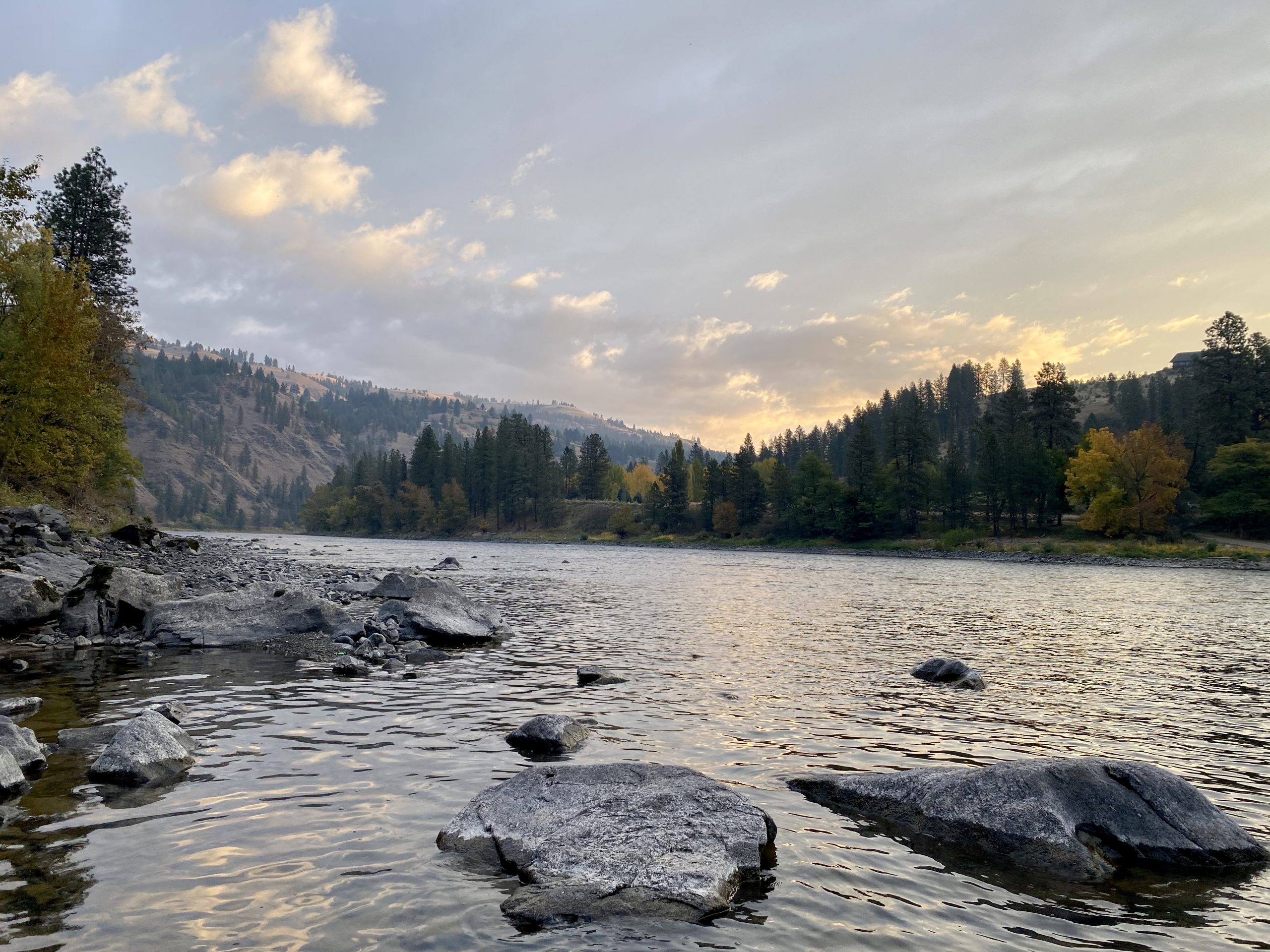 Don’t miss parts one, two and three of the The Point of Engagement series.

“I don’t have a lot of rules, but, there’s one rule,” Matt Steinwurtzel says as we step off the bank into his raft. No more than six or seven feet long, the dinghy is far from seaworthy, but it’s all we need to cross the Clearwater River one day in late October.

“If we get a fish, that’s it for the day,” Steinwurtzel states in a suggestive tone, indicating consensus is necessary before departure.

Considering getting freight-trained by the anadromous icons of Idaho — the B-run steelhead of the Clearwater — was a pipe dream when this steelhead addiction began, I quickly tell him that’s more than ok with me. The fish that return to the Clearwater are, to put it simply, freaks. Commonly averaging 10-16 pounds, regularly more, B-runs are also some of the highest elevation and furthest inland traveling steelhead on earth.

Historically, 10-16 million salmon and steelhead returned to the Columbia River Basin. Prior to the dam building era of the 1950s through 1970s, approximately 45,000-wild steelhead returned on an annual basis to the freshwater tributaries of the Clearwater Basin. In 2022, while the conversations based on hatchery returns highlight the “strength” of the returns, wild steelhead over Lower Granite Dam are down 33-percent from the 10-year average, an already disproportionately low average that includes all-time low returns of 2017-2018 and 2020-2021.

At dawn in a steady, unrelenting rain, we set off on what felt like an appropriately impossible pursuit.

Steinwurtzel is a current graduate student at the University of Idaho pursuing a master’s degree in fisheries science and management. His research focuses on utilizing drone imagery to determine the impacts that beavers have on the aquatic thermal and storage properties of salmonid-bearing streams. Equal parts fly-angler and fisheries researcher, Steinwurtzel believes in a future where both resident and anadromous cold-water fisheries are abundant throughout Idaho and the greater Northwest.

Legs entangled in the little raft, we crisscrossed the river. We both cast 15’ 8-weights in order to cover the Clearwater’s famously oversized runs. Not more than a few hours into the morning, Steinwurtzel’s line goes tight, and he sweeps toward the bank.

“Good fish. Heavvvvvvvy fish,” he growls intensely, fixated on the battle at hand. Tailing the fish – which refused to surface during the battle — we see it’s a girthy hatchery buck. Fishing within the Clearwater’s catch and release season, we’re forced to let it go.

Minutes later, my own rod is pulsing to the cork. Managing to hold on a minute (or ten, who’s to say?), the largest steelhead I’ve ever seen launches itself into the air. I gasp as I unsuccessfully attempt to lower the rod tip in time to avoid the inevitable. Upon landing, the line goes slack, equal testament to the size of the fish and lack of skill of the angler.

To this day, that moment haunts me far more than any other “one that got away.” I wonder what efforts it will take to ensure my first connection with the authentic emblem of my home state isn’t my last.

In that moment, it isn’t lost on me that I stand with Steinwurtzel, who stands just downstream, focused on a large deceased Chinook salmon. Diligently working, quietly observing and persistently advocating for the future of this river and its fish, steeped in legend, lore and controversy, he inspires hope.

It was only fitting the next weekend I found myself westbound for the Rogue River in southwest Oregon. Contrary to the unicorn pursuits of Idaho, the Rogue has the largest wild steelhead population with the greatest diversity of any system in the South Coast region. The Rogue River has a well established and historical presence in the steelhead world, first documented by Zane Grey as early as the late 1920s.

In a prototypical steelhead scene — fog sitting heavy and low on the ceilings of pines and snow lining the banks — local steelheader and advocate Rob Beckius and I trade runs. “Do you have a friend that can’t find a fish if he has one on the line? Who just has the worst luck?” Beckius begins to ask me from the bank as my reel begins to sing our favorite song.

“Yea! It’s usually me!” I respond, laughing with irony.

“I wouldn’t say so,” Beckius responds with a smile as I quickly tail and release my first Rogue fish, a larger than average wild buck. As is usually the case, early luck means an almost certain slump to follow. This leaves plenty of time for bankside banter with Beckius, who was active in opposing the recently adopted Rogue-South Coast Multi-Species Conservation and Management Plan.

Unfortunately, the plan, which allows for continued harvest of wild steelhead, fails to adequately establish monitoring protocols required to take stock of wild steelhead populations and angling impacts on Oregon’s South Coast rivers. Currently, no one can confidently confirm how many wild steelhead are being taken each season or how big of an impact on the total run size this harvest represents.

“It just doesn’t make sense to me,” Beckius, a perpetual pragmatist, says plainly. “We’ve removed dams to enhance passage. We have hatcheries. No one is even asking to ‘take away’ folks’ opportunities for harvest, but why wild fish? If there are already hatcheries in place for harvest opportunities and we know those are decreasing genetic diversity, why are we risking even more damage by killing our wild fish?”

“The runs of salmon and steelhead in the Rogue River system today are far below their former population levels. Actually, there are only a few people living who can recall the almost unlimited abundance of these fish before the decline began,” Oregon State Game Commission biologist Cole River wrote way back in 1961.

Anecdotal evidence should never supersede scientific data, but as my days on the Rogue River came to a close, I realize the importance of oral tradition when staring into the abyss of the unknown.

Inevitably, on the banks of steelhead rivers and around campfires the world over, new anglers are battered with tales of how good it used to be.

There’s a quiet stubbornness to our community, and we are tight lipped for good reason. There is a blend of protectiveness and caution in communities that have watched populations slide towards the fish of 1,000 casts. There are a lucky few whose local rivers display relative abundance, but they are concerned scarcity is coming for their river soon.

Often unrecognized is the crucial role the listeners – the new anglers and advocates – play in breaking the vicious cycle of shifting baseline. Sure, it’s difficult to swallow another story sharing how you should have been here yesterday, but I believe it is our duty to the members of this community and to the fish to know where we’ve been and to take us where we’ve never been before.

Persistence will win the day, but not alone. Conserving wild steelhead will require adoption of the best of history, but also, evolution. The Point Of Engagement is simultaneously a connection with the fish of dreams, creatures that connect ecosystems and inspire addictions, but, a moment of cultural, historical and social transference.

Until the next steelhead season, either tomorrow, next week or next year, action will be the only way to enable ourselves to speak honestly of how wonderful it is, and not longingly of how great it used to be.

The Point of Engagement series has been brought to you by: