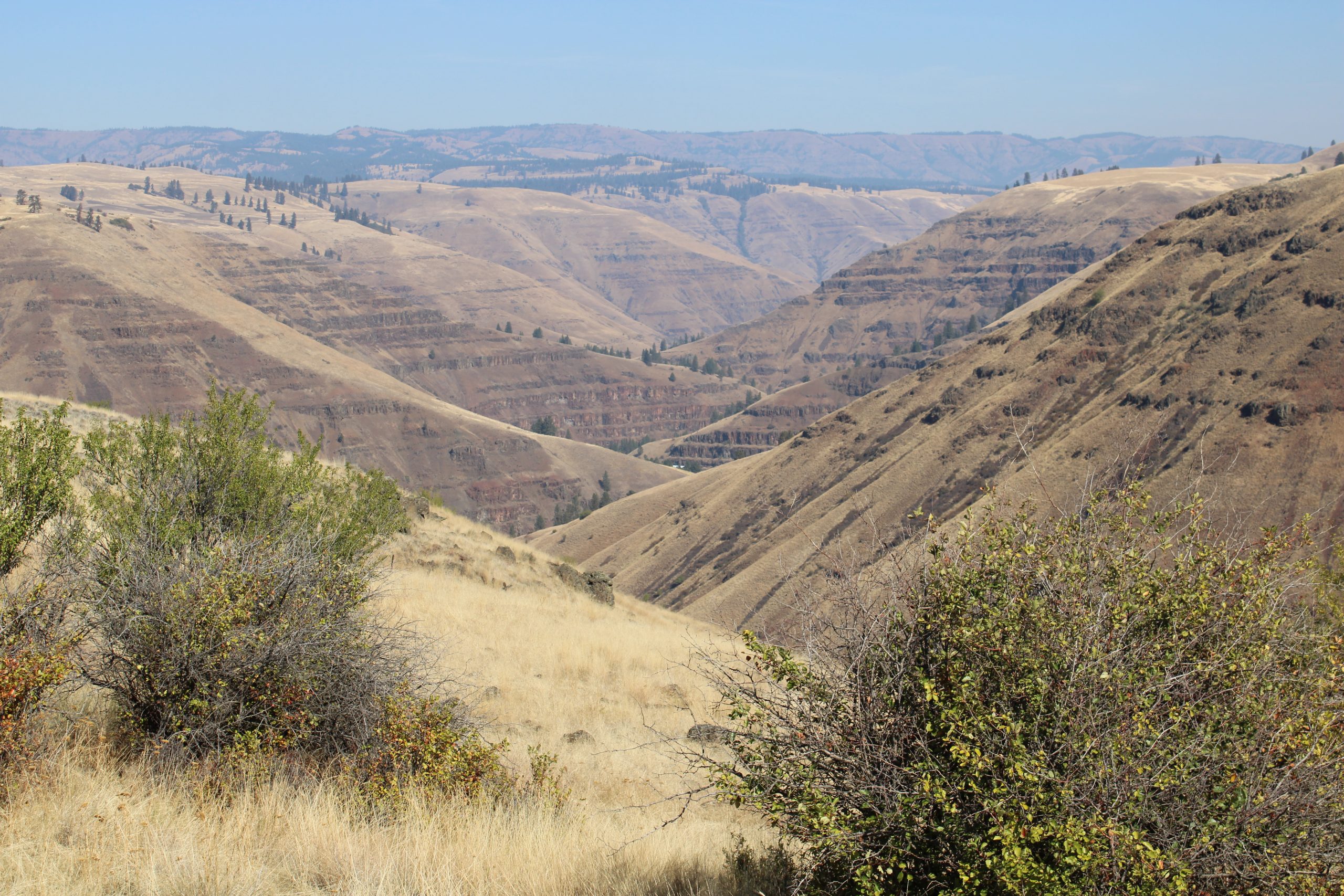 Click here to read the first article in Daniel’s series, “The Point of Engagement: Part 1″

Click here to read the second article in Daniel’s series, “The Point of Engagement: Part 2”

In northeast Oregon, the Wild and Scenic Grande Ronde River runs northbound before dumping into the Snake. Meandering underneath often vertical basalt walls with ceilings of evergreen and pine, the river has long been attractive to anglers in search of isolated experiences.

The river isn’t “out there” in the same way as a vast wilderness, but even the gritty roads – reaching out for hundreds of square miles through sprawling ranch and farmlands – leave no doubt that while there are small pockets of civilization, you’re certainly a long, long way from anywhere else.

I embrace an embarrassingly new confidence on my fourth fishless day on the Grande Ronde, more feeling than seeing casts fully laying out and knowing the flies are fishing immediately upon hitting the surface.

No more than a handful of casts into the head of a long run, downstream of Troy, my small Lady Caroline is viciously attacked. Quickly reeling in a small but violently thrashing fish, my disappointment turns to joy as I am surprised to see the light spots and enlarged head of a young bull trout.

The emotional rollercoaster continues when my heart sinks upon seeing that in devouring the fly, the char had taken the barbless hook deep and carved it in and then out of its cheek, close to the front of the gill plate. Its mandible, sadly, was twisted around the shank of the hook and blood slowly dripped from the corner of its mouth.

Bull trout are one of the most fascinating, mysterious and resilient of the West’s native salmonids. A deep sorrow flushes through me as I pluck out the entangled hook and, as is regulation, release the fish into the current. It swims away, but by the state of its jaw and cheek, I suspect mortal injuries.

I reel in my line. That smooth cast, inspiring confidence earlier, now felt like a holstered weapon.

Justifiably, recreational anglers, including catch-and-release fisherman swinging flies for steelhead, find ourselves caught in emotionally charged blame-game crossfire for the decline of anadromous species in the lower-48.

Specifically in the Columbia Basin, in the recently released Rebuilding Interior Columbia Basin Salmon and Steelhead final report, the National Oceanic and Atmospheric Administration (NOAA) in no uncertain terms shows that fisheries are the last, and next-to-last leading cause of decline of Snake River salmon and steelhead (Figure 3. Page 12.).  Not only that, a recent study by the University of Idaho reveals that wild steelhead are caught less frequently and have a lower than previously thought mortality rate (3.8%) when released after catch.

To be explicitly clear, I am not proposing that in these statistics lies absolution. Our low-percentage mortality effects are multiplied on biological strongholds like the Grande Ronde and Imnaha Rivers that account for 27.2% and 7.3%, respectively, of all wild steelhead returning to the entire Snake River, according to information recently collected from Lower Granite Dam on the Snake River.

As has become cliche to say, the plight of the wild steelhead is a death of a thousand cuts. Often, this hierarchy of guilt and responsibility leads to what I’ve become fond of calling the “whatabouts.”

“What about commercial fishing regulation? What about nets? What about hatcheries? What about pinniped predation?” are the most common questions asked when an agency, conservation group, brand, or well-meaning, tax-paying, law-abiding citizen angler attempts to remind us of proper fish handling, suggests considering water and air temperatures, or even have the audacity to hang it up after a fish or two in a day.

“It’s not my fault,” the whatabouts are stating, more than asking anything.

It’s up to the rest of us to spend what little time we have focused on identifying the underlying diseases causing bleeding rather than arguing over which individual cut will be responsible for leaking the most.

Stepping foot into my new favorite – a boulder strewn run near camp – on my ninth full day pursuing steelhead on the swing, the midday sun beams directly overhead.

It was, by all accords, the wrong time and the wrong place for steelheading. The brightest part of the brightest day. After a few passes through using different techniques, tips and flies, I decide to take a last run through, this time pushing a bit further out into the juicy tailout water.

In a nondescript moment of a nondescript swing in the least likely portion of the run, a large fish slashes from below, taking the fly, upside-down tail-walking with its belly to the sky before turning to run. The fish makes one great run, before forcing me to work it out of every deep pocket it can find between us.

After a spirited but short-lived fight, I manage to tail it.

I held her remarkable paddle through one half-assed attempt to escape, before she takes off like a rocket with her next burst, leaving me with confidence she would live to add her incredible genes to a pool upstream.

I sank to my knees and gave a yell that no one would hear.

Intertwined in my memories of that day are the glaring eyes of the injured bull trout and the beautiful, perfect paddle of my first wild steelhead.

Win, lose, or draw, our pursuit is dynamic and paradoxical and it will take a true and collaborative paradigm shift to change our focus toward curing our diseases as opposed to arguing over where to place band-aids on the symptoms.

My choice to return to the river that day, I didn’t realize until later, was an act of acceptance and an acknowledgement of the realities of the paradox itself. We are each responsible for our actions, and therefore we’re all on the hook – to the fish, and to each other.

There is no “other,” nor are there innocents. Essential to a paradox is connectivity. Owning our responsibility allows us to hold accountability and expect the same. It allows us to have honest and well-intended conversations aimed at true solutions.

To remain entangled is to hope no one or no thing is left behind.

Somewhere between minimizing our actions with negative consequences and embracing low risk actions potentially leading to great impacts, is a balancing point.

The Point of Engagement.