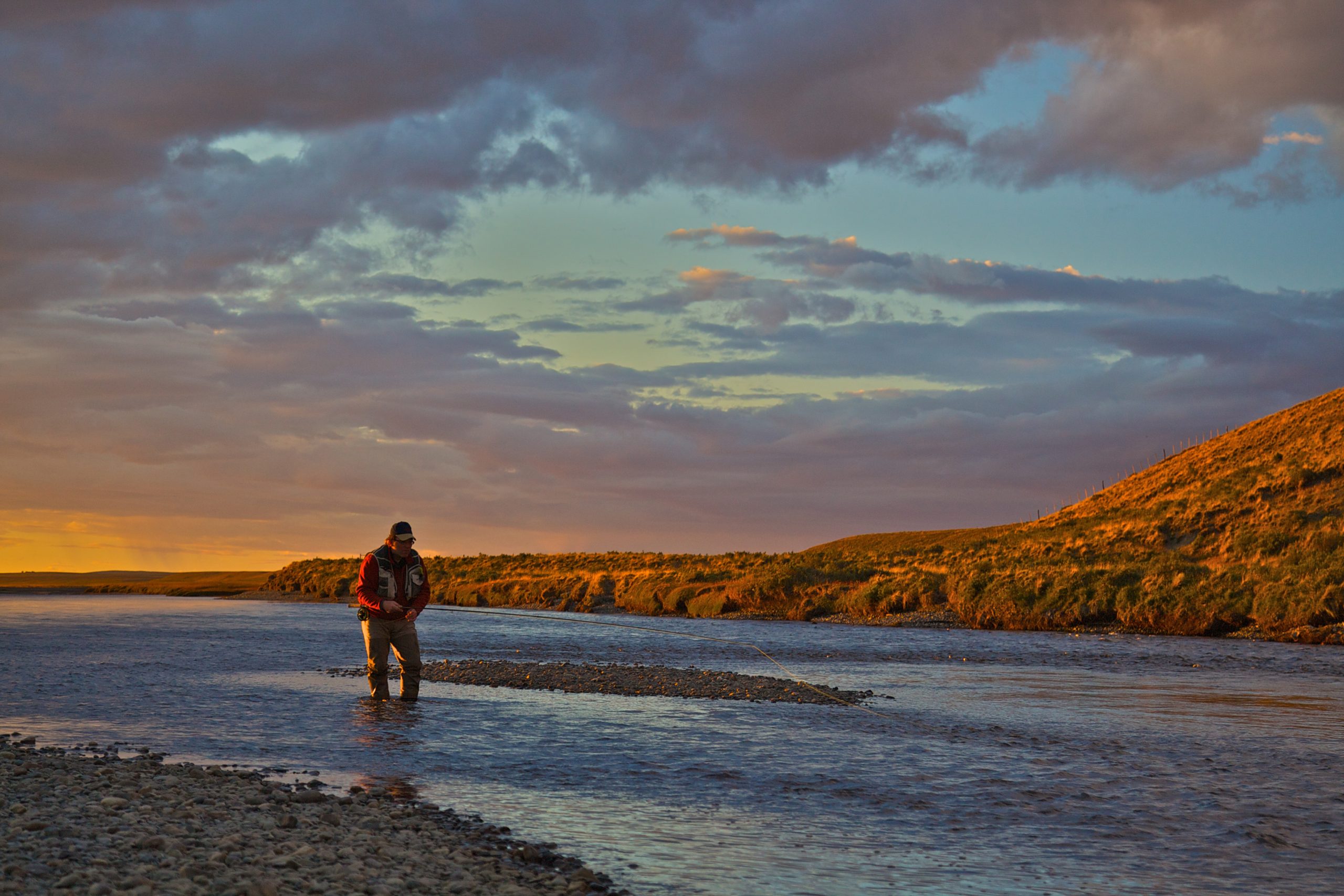 This article originally appeared in the 2017.2 issue of Swing the Fly magazine and is free to view. Enjoy, and if you’re not already a member, consider joining to get access to all the member content and the Anthology book.

Last January, Michael and I finally stood on the banks of the Rio Grande in Tierra del Fuego. Like always, we booked on a relatively short notice, but we made it. We even man-aged to fill our fly boxes with all kinds of differnt flies, from Wooly Buggers to tube flies, rubber leg nymphs and Sunray shadows. That took us a few long nights but we were safe for flies. That’s what we thought. There was one fly that we didn’t have in our box. To be honest, we didn’t even think about it. A fly which usually is fished for Atlantic salmon in Canada and has her roots on the Miramichi. The Green Machine.

Michael and I were totally surprised when we finally felt the gravel of the river on our wading boots and our guide, Max, opened his fly box. That’s not what we expected. The box was full of small deer hair bombers. Mainly in green, stuck in the white foam, and all mixed up. Green Machines! At first sight, those flies looked like typical bombers, which are fished dry on the surface. The deer hair and the hackle speak to this -clear case of a dry fly. In short, we were wrong. When Max was asking me if I had a slow-sinking polyleader I became suspicious. “How do those belong together?” I asked Max, while I was pulling my leader out of the fishing vest and connecting it to the floating shooting head. Alex smiled and said: “We don´t fish the Green Machine on the surface, we fish it below! Not only on the Grande but also in Canada!” he explained. Well, there is alway something to learn.

Max took one of his Green Machines out of the box and tied it to the leader with a perfec-tion loop. He showed me a place where the river narrows to the typical v-shape just as I like from salmon fishing. “The river here is not so deep, but in the middle there is a hole which usually holds some good sea trout,” Max told me. “The best presentation is at a 45 degree angle downstream. Cast slightly over the hole, then lift the rod so that the pressure of the line puts the fly under the surface. And then let the fly swing slowly over the trouts holding place.” I was impressed and did my best to do exactly what Max told me. I expect-ed everything at the Rio Grande, except to fish with a floating line and a small green fly tied with deer hair right under the surface. In my head I always had the question in mind: “Why the heck should a big sea trout bite on such a small thing?“

What makes this fly so attractive to sea trout? One can only guess. Fact is, it caught fish! And there was something else happening, something quite exceptional and interesting. The takes were not as spectacular as I had expected. No… the trout took the Green Ma-chine very gently, almost like a grayling picking up a dry fly. The reactions after setting the hook were the total opposite. Like salmon fishing, I was lifting the rod after I felt the fish running against the soft brake of my fly reel. After the second drift, a good sized trout came up to the surface right at the place were Alex expected it. We saw the wave behind the fly and seconds later the fish attacked and line was running off my reel. The trout was on and moved downstream pretty fast. During the first run it jumped two or three times out of the water. No question about it, that was a fresh, bright sea trout…and of good size too.

“Wow!“ I heard Michael in the background. We both were astonished with how much power and strength the fish was taking line from my reel. It was a hard fight until the trout was in the net. A dream in silver. “Around six kilos,” Max guessed. The fish was lying in the net, but didn’t need much time to recover. Alex took it out of the net and the fish was swimming away immediately. One strike with the tail and the trout dissappeared, back into his world.

I was looking behind the fish, then I started to realize the landscape around me. The big wide open country wasn’t so bad at all. Actually, I really liked it. Beautiful light and a relatively soft wind was touching my skin while I was watching a few Guanaco, which were standing on a hill. I felt pure happiness.

Everything was right. The big trout, the landscape around me, the lodge…simply overwhelming. Michael saw my face. I think he knew what I was feeling. He smiled, went to the car and did the only right thing to do in such cases. He took two bottles of beer out of the cooler. Then he said: “Thomas, those moments we have to celebrate!“ He was so right, and it wasn’t the last one to celebrate on the Rio Grande.