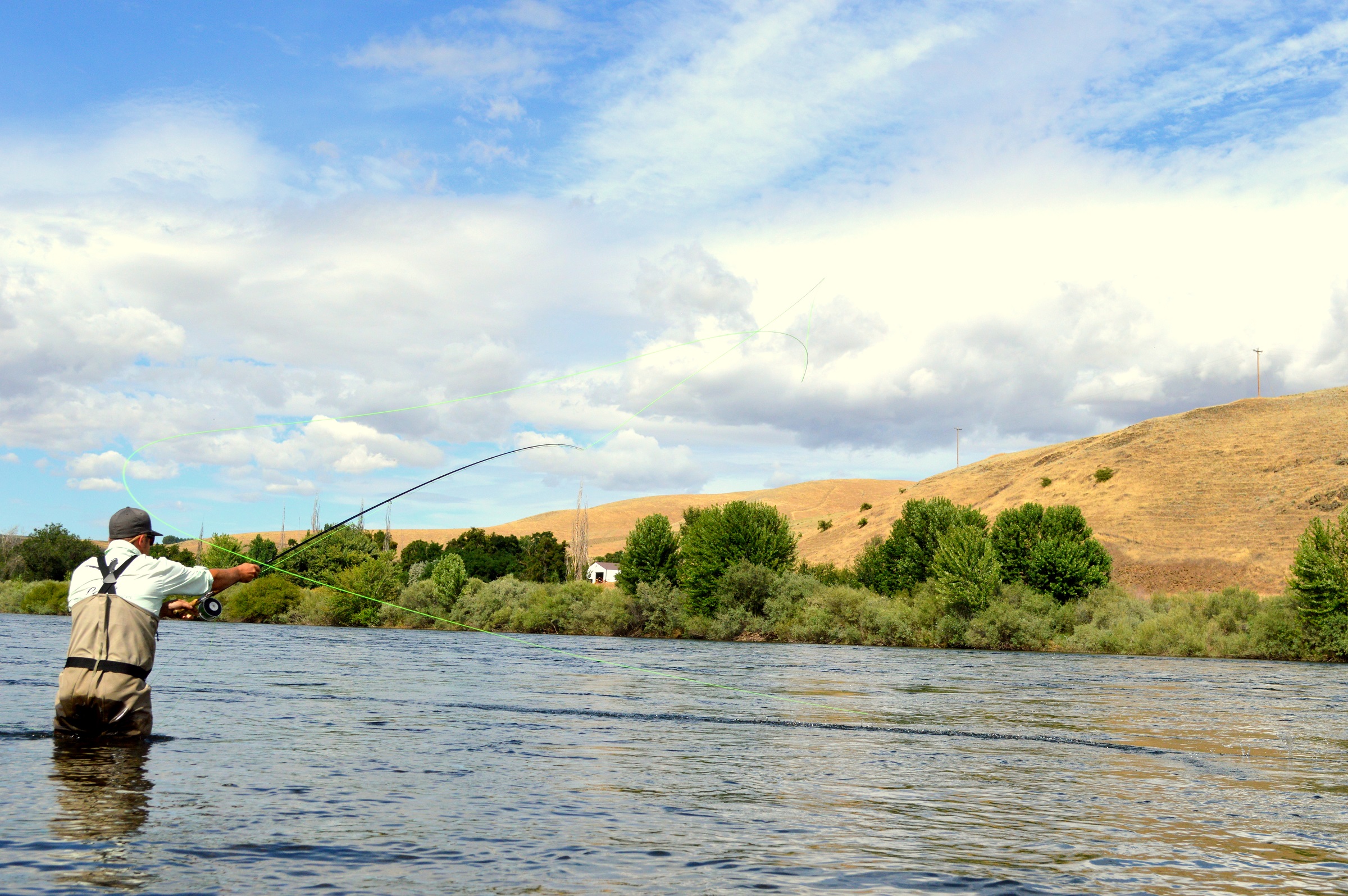 I’m a firm believer in simplifying processes. First understand what we are trying to accomplish in simple terms and then break it down into steps that will get us there. Learning to spey cast is no different. While you certainly can make it as complicated as you want, for me, keeping it as simple as possible has led to the most satisfying results.

What is a spey cast?

A spey cast is basically a dynamic roll cast. Most anglers come to spey casting from single-hand rods and conventional fly casting, and thus are familiar with a roll cast. In a roll cast, we slowly bring the rod tip up to approximately a 10 o’clock position behind us. We pause there, and the line front end of the line is connected to the water in what we call an “anchor.” From there we “roll” the line forward towards our target with a forward cast. A good forward cast smoothly accelerates the rod tip in a straight line towards the target, freeing the anchor from the water and unrolling the line.

A spey cast is going to do the same thing but add two simple components: 1) a change of direction, (meaning rather than picking the line up and sending it back in the same direction, we will typically start with our line hanging straight downriver and then cast it back across the stream with the spey cast.) 2. A spey cast is what we call dynamic. In a roll cast, as mentioned, we slowly pick the rod up to 10 o’clock and then stop and let the line settle into its anchor before the forward cast begins. A dynamic cast like a spey cast is going to keep the line in motion, avoiding a lengthy pause. That’s it: a dynamic roll cast with a change of direction is a spey cast. The anchor is the critical component of all spey (and roll) casts that differentiate them from the standard overhead cast.

All good anchors in both spey and roll casting do two things:

There are two main types of spey casts:

-waterborne anchor casts, which make an initial move that positions the line and anchor on the water, where it will remain until the forward cast delivers the line towards it’s target.

-touch-and-go anchor casts, which do not have that initial step placing the line on the water. Instead the line will be aerialized, then briefly “touch” the water to form the anchor before the forward cast.

There are myriad variations of the spey cast out there. They all fall into those two categories, and all are just different ways of forming an anchor. I like to break all spey casts down into three very simple steps:

1. lift/anchor set: OK, in a waterborne anchor cast, this maybe could be broken into two steps, but let’s stick with the rule of threes. The lift serves a crucial role in the spey cast, which is to eliminate the variable of water tension. A good lift has a rod tip that travels straight upwards and is done very slowly, releasing the line from the water tension. On a touch-and-go cast (single spey, snake roll), you are done with step 1 after the lift. On a waterborne anchor cast (double spey, circle spey/snap-t, perry poke), you will make some sort of move following the lift to position the line.

2. sweep: the goal of the sweep is to form your anchor, which needs to be pointing at your target and provide the proper amount of water tension. The best way to do this is sweep your rod tip in a level incline plane that finishes with the tip pointing opposite your target. If you accomplish that with the correct amount of power, you should have a nice anchor that points at your target.

3. forward cast: the forward cast is really nothing special if you’ve ever cast a single-hand rod. As long as the tip travels a straight line towards your target, you’ll be in good shape. We do have two hands on the rod in this, so using both is very advantageous. Don’t overpower it, and you’ll have completed the spey cast.

Of course, nutshells don’t provide the total picture on completing a spey cast, but sometimes I find when things get overly complicated, and everything is a struggle, it helps to step back and see what really matters. In spey casting, if you can create an anchor of your leader/sinktip that points towards your target and provides the proper amount of water tension, you’ll be in great shape. And if you’re struggling, I’d suggest you ask yourself if you are satisfying those two criteria.