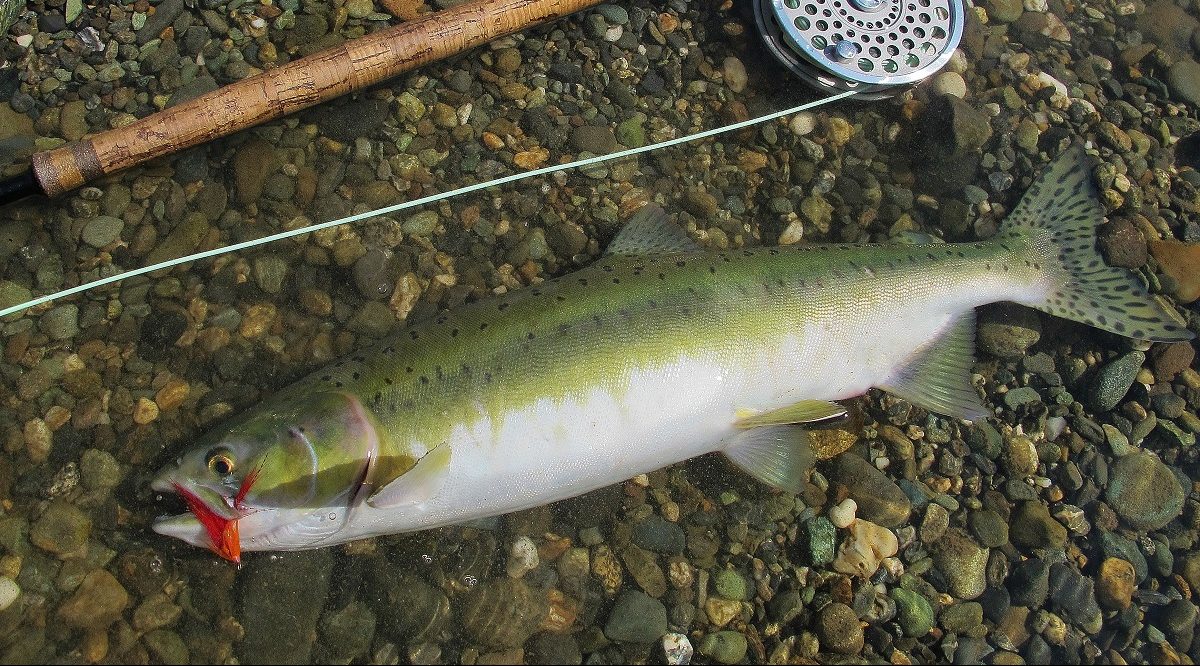 It’s interesting that Roderick Haig Brown of Cambell River B.C. didn’t identify as a “steelheader”, though he certainly was. A native of Britain, Haig Brown saw steelhead as trout, just as sea-run browns of the British Isles are considered trout, and the impression I get from his writing leads me to believe he considered all trout and salmon to be equals in the hierarchy of fishes.

I’ve never been able to get a handle on the value metrics we attribute to fish. Why do we consider certain salmonid species more desirable than others?  Would we think that way if we hadn’t been influenced and acculturated with the prevailing notions of others? And it seems that, as species like steelhead or Atlantic salmon become scarce, a hazy melancholia accompanied by a gilded mythos enters to fill the void they left. That’s not to devalue those great fish. But does it serve to undervalue their more numerous relatives?

What constitutes the value of a fish? How good it tastes? How well it fights? How big it grows? How rare it is?

I once watched a steelheader hook a really nice chum salmon on the swing, and the chum lit up and bolted downstream instantly ripping through the reel’s backing while the guy followed down the bank, stoked and whooping as he went. Thinking he was on to a tanker steelhead he shouted, “Oh man! Biggest steel I’ve every hooked!” And the chum, about fifteen pounds, nearly emptied the reel spool before the lucky angler, with great effort and pleasure, finally gained the upper hand. When the salmon came to color the guy’s expression changed from ecstatic to disappointed. “Shit. Goddam chum.” And he proceeded trying to shake the fish off without bringing it to hand and counting coup to honor the fish.

He was there to get a grab and was going to release any steelhead he caught, so table fare wasn’t a factor. The chum fought so well the guy thought he was into his best steelhead ever, so an unsatisfactory battle wasn’t a factor either. The buck chum was bad-ass, fresh and perfect, the autumn-purple barring just beginning to flush its muscular flanks, so I hate to think its looks were a disqualifying factor.

Only reason I can think of for the ruined fun is that other people had influenced that man’s opinion of chum salmon and put him on track to a narrow-minded, fun-killing, belief system.

And what affect does that kind of thinking have on our fish?

Assigned a low status because they were not considered as good eating as cutthroat and rainbow trout, the race of giant dolly varden / bull trout was pitchforked to near extinction on many rivers in the western U.S., particularly Idaho and Montana. The killing became common practice, a custom, even among those who didn’t care to eat fish of any species. Once the word was out that this was an undesirable fish, the good country folks went on a killing spree. “Just what people do.”

I remember a time on my home water when abundant mountain whitefish – a sporty salmonid closely related to grayling – were considered “trash fish” by locals who tossed them up on the bank while fishing for trout. Just what people do. That practice, along with the introduction of walleye, bass, and northern pike – fish considered more desirable than the native mountain whitefish – has resulted in the near extirpation of whitefish from our segment of the Columbia system. And recent surveys have shown that an estimated 60% of the segment’s native trout are eaten by predatory, non-native species, mainly walleye and smallmouth bass, before they reach maturity. Ironically, WDFW came to see (illegally introduced) walleye as a desirable species and easy mitigation for the loss of salmon due to the construction of Grand Coulee Dam, so initiated a program to ‘manage’ for walleye which included closure and protection of walleye spawning areas, this policy contributing greatly to the current disaster.

Just what people do.

Our prized steelhead, though once plentiful, have always been among the rarest of West Coast anadromous salmonids, the vast majority of their kind returning to Kamchatka rivers, in Siberia. Now, even in a state of alarming decline, marketers and outfitters continue to advertise and sell gear meant for steelheading as if no crisis exists, and those who pursue no other sea-runs but steelhead are still paying for expensive trips to rivers expecting record low returns. (A fish we’re loving to death?) Yet despite best efforts to uphold the mythology, I’ve recently heard a couple guys express they are hanging up their rods and quitting fishing because of the lack of steelhead.

And to those who would hang up their rods for a lack of steelhead, I say: “Goodbye. May as well quit reading right here, you could be golfing. How much do you want for the Meiser and the Hardy?”

We tend to be flippant, disrespectful and wasteful when faced with abundance. It seems the more plentiful a fish species is, the lower we place it in the hierarchy of fishes.

“Don’t it always seem to go? You don’t know what you got till it’s gone.” ~Joni Mitchell

I fished for pink salmon in 2021. Pinks are abundant during odd-numbered years. There was a decent run and we had a lot of action and a great time fishing for them. Where they occur pinks are the most abundant of West Coast salmon species. Averaging about four to six pounds they are also the smallest. And they are considered among the least good eating. Three strikes against them right there. But I would argue, pound-for-pound, pink salmon fight as well as any salmonid. And to my eye there is no salmon or trout more beautiful than a fresh-run hen pink salmon starting to bloom autumn spawning colors – and none more exotic than a humpy buck. Smoked, pink salmon are as fine eating as any of its cousins. In 2021 they were numerous enough anglers were allowed to keep four a day for the smoker.

Ever notice? Everything under this sun seems to run in cycles. Like the moon, both waxing and waning. Those cycles, in our time, are ultimately affected by what humans, the masters and stewards of this world, do. If we do the right things the great cycle of steelhead may once again wax full. Depending on what we do.

Like Roderick Haig Brown, I’m a trout and salmon fisherman. From where I live it’s at least a six-hour drive to rivers holding sea-run trout or salmon. Some years I’m only able to get in a few days on the coastal rivers. Do I want to spend those precious days suffering a voluntary beat-down swinging over water holding few if any steelhead? Or pestering what few there may be? No. My time devoted to them will be in writing letters on their behalf and donating to organizations working on their behalf. Giving steelhead a break because right now they need all the breaks they can get. Besides, Spey was born on rivers no steelhead ever ascended and that didn’t stop anybody from fishing. There are other trout and salmon to pursue, each offering its own particular challenges and pleasures. And if considered without popular bias, all equally worthwhile.