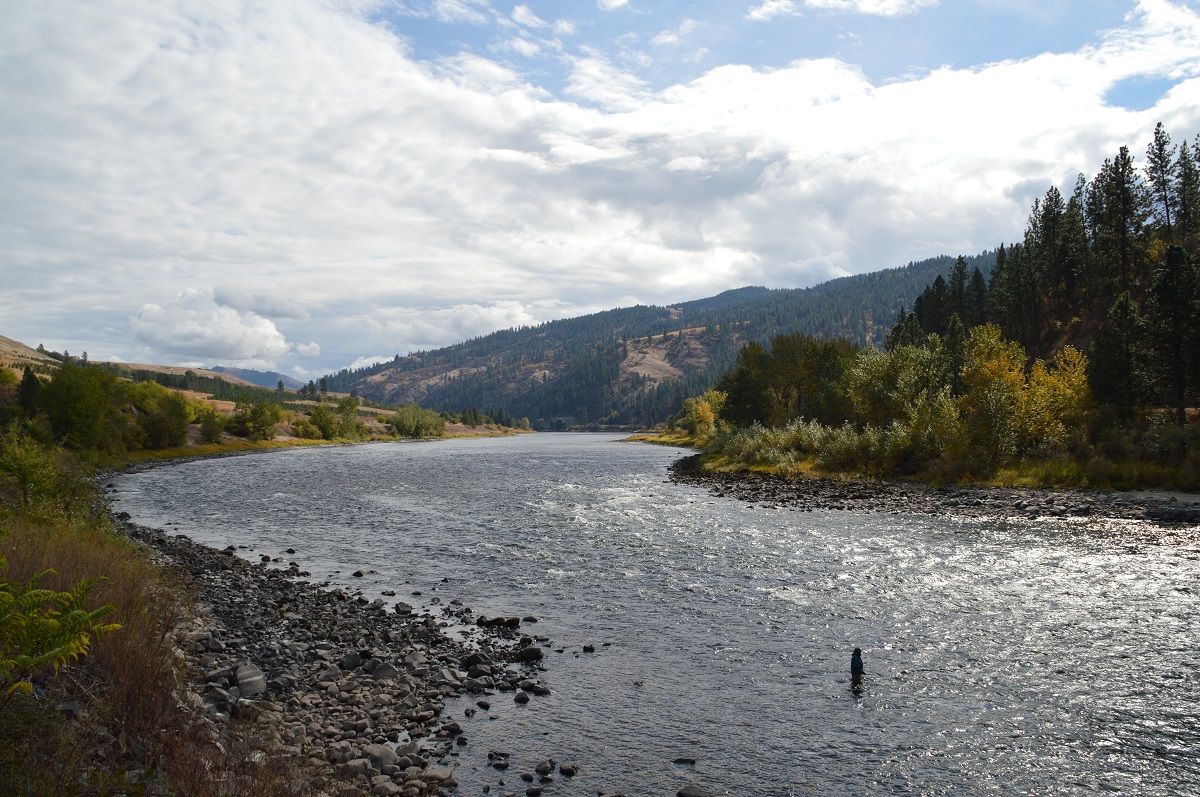 Just admit it: You took up flyfishing years ago mostly because it looked eminently cool.

The rods were sleek, the reels were works of art, like a cross between the Golden Gate Bridge and a Ferris Wheel.  And those perfectly cast loops of fly line were just flat-out sexy.

But at some point in your fly fishing daydreams, the river threw a rock through your windshield.  And that rock was the tip of a much larger rock that was firmly planted in the river, separating you from the 19-inch cutthroat smashing caddis emergers on the Other Side.  You stared at that cursed rock for what seemed like an hour before you walked on past to find an easier cast.  You judged that fish to be unreachable.

Not so fast, my friend.  Simon Gawesworth has come to your rescue with a multitude of options in the second edition of Single-Handed Spey Casting: Solutions to Casts, Obstructions, Tight Spots, and Other Casting Challenges of Real-Life Fishing.  And if that sounds like a lot of information to pack into a book title, that is because there is a lot of information in this book. Building upon the success of the first book, this edition features additional photographs, diagrams, and text, all of which contribute to building your skill set as a fly caster.

Simon Gawesworth has accomplished a great many things in his flyfishing career, and among those accomplishments is international recognition for his instructional abilities.  Through his casting schools in his native England, as well as countless appearances at flyfishing trade shows all over the world, Simon has sought to make spey casters ambassadors of the sport.  He truly believes that expert spey casters have the ability to make the everyday spearchucker want to pick up the long rod and create the same kind of magic. Anyone who has stood in a stream and despaired over casting obstacles knows frustration.  If not for that rock in front of me, or that overhanging willow on the far bank, or that wind in my face, that cutthroat would see my fly and it’s game on!  But this book gives fly casters the tools to overcome most, if not all, those obstacles.

Buyer beware, this is not a book for the novice caster. As Gawesworth states in his opening sentence, an understanding of the overhead cast and some competence with its execution are the minimum qualifications for entry to the gold mine.  “Fly casting is a skill developed over time and with practice,” and Gawesworth emphasizes this theme throughout the book.  Simply put, you cannot read through this book in one sitting and master its contents.  Learn the basics, the foundations, and develop your skills over time.  The satisfaction you get from this will be more than worthwhile.

With a particularly thoughtful organization of sections and chapters, Gawesworth guides the reader through a discussion of the basics, followed by solving the casting problems found behind you (bushes, grassy banks, etc.), problems in front of you (rocks, conflicting currents, etc.), and combinations of both.  Starting with the fundamentals of the roll cast, the book progresses through the switch cast, single spey, double spey, snake roll, snap T, and others.  Not only does Single-Handed Spey Casting describe the mechanics of each cast through photographs and effective diagrams, it gives a layman’s explanation of the physics of casting, with an understandable explanation of line speed versus counteracting gravity, rod torque, and loop formation.  For those casters who can’t quite understand why some of their casts unfurl like a work of art (“ballet with a fly line” in Gawesworth’s terms) and some land in front of them like a cowpie, the answers to these mysteries are clearly described in each chapter.  You will know exactly why some casts succeed and some fail, and even more importantly, you will know how to perform them correctly.

In the section entitled “Problems in Front” there are concise descriptions of when and how to use the side cast, shepherd’s crook, nymph pitch, and reach cast.  Each cast is designed to overcome one or more casting obstacles, and each is described with the same step-by-step approach.  A welcome addition to this second edition of the book is “Cast Stringing,” where Gawesworth demonstrates combinations of casts melded into one. When you get to this phase of casting prowess, you have reached the major leagues.

The closing sections of Single-Handed Spey Casting covers methods of increasing casting distance (single-, double-, and even triple-hauls) and modern spey casting tackle.  Although these chapters are brief by design (it is not a book about tackle), they provide valuable insight into the various contributions of rod length and action, fly line type, and proper leader construction.

The gravel bar utility of this book might be a bit harder to define.  For those of you who cannot fathom carrying a 256-page book to the river in your daypack, please reconsider.  This book is every bit of a field manual despite its size.  While Gawesworth admits that different casters learn best in different ways, this book can be a tool for streamside learning and improvement.  Sprinkled throughout the book are references to instructional videos and websites that augment the contents.  A good friend of mine had a particularly crusty old acquaintance who claimed, “You can’t learn nuthin’ from a book!”  While most of us disagree, it’s good to have options.

You’ll be glad to have this book with you on the riverbank (or at least at home in a nice, warm library) the next time you face a casting dilemma that might have defeated you on a previous day.  Keep it dry or get it wet, you will be glad you own it when you encounter your next Rock of Gibraltar.

For information about ordering this book online, click here on Single-Handed Spey Casting.