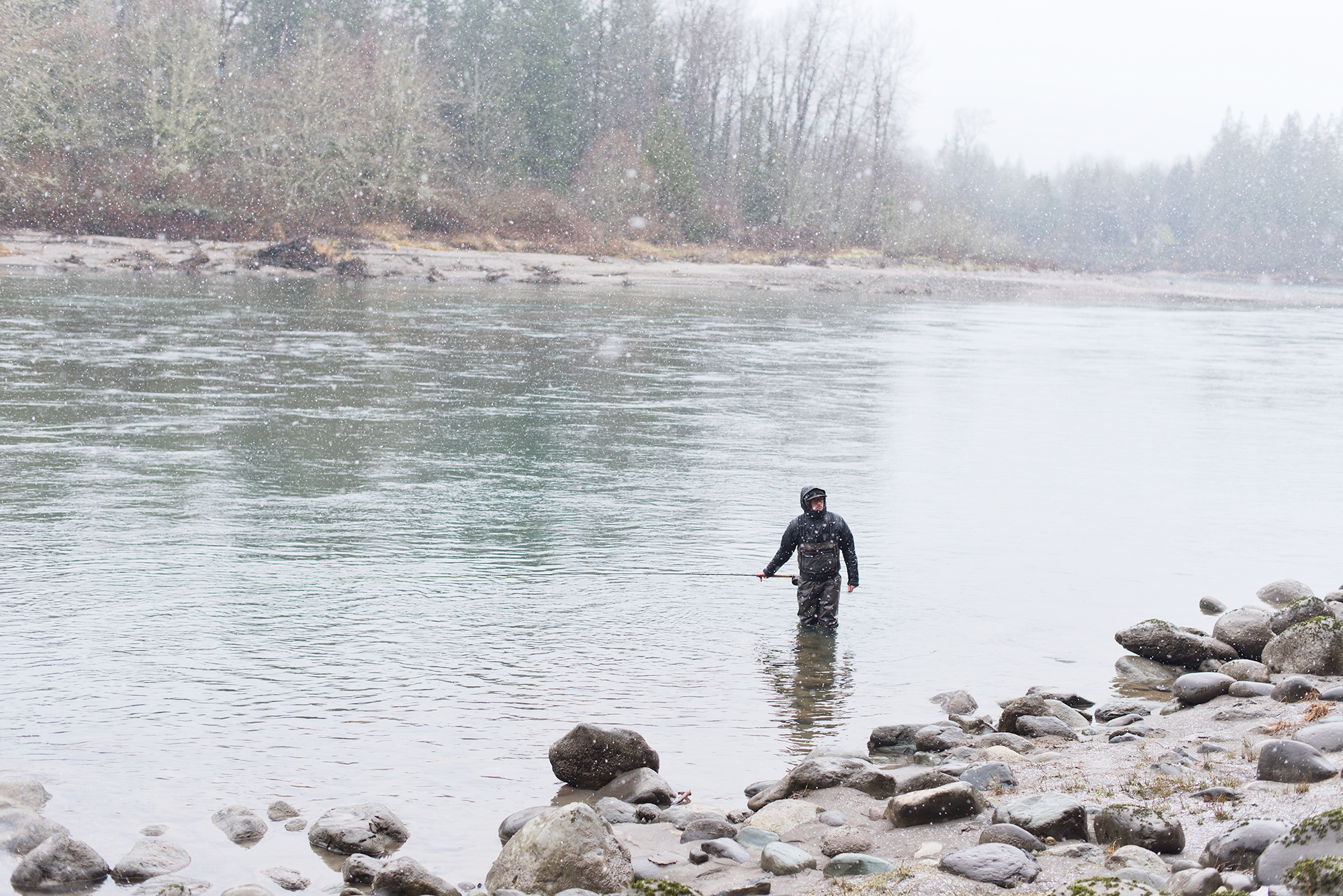 This week the Washington Department of Fish and Wildlife (WFDFW) announced the Skagit and Sauk rivers catch-and-release wild steelhead season will reopen this spring. The popular fishery remained closed last year due to low projected fish returns. The season will run from February 1st through April 13th and be operated under conservation measures, such as only fishing four days a week, to reduce anglers’ impact on struggling wild steelhead runs.

News of the upcoming spring 2021 catch-and-release steelhead season has travelled fast. The announcement has been met with a mix of celebration and concern across the angling community, especially in light of recent emergency rule changes affecting Washington’s coastal rivers, and how they could shift angling pressure to the Skagit.

For our part, the Wild Steelhead Coalition is deeply concerned about the Skagit system’s depressed steelhead run counts and the potential impact of this season. As passionate steelheaders, we want to fish these iconic rivers as much as anyone, but we also recognize that steelhead numbers in the Skagit and Sauk are currently on a razor’s edge.

We are cautiously encouraged by the projected uptick in fish numbers, but this forecasted return will only be confirmed after spawning surveys following the 2021 season. Hopefully, the projections are accurate and we experience a stronger run than last year. But given the low numbers, we believe we should always err on the side of conservation, restraint, and a continued support of recovery in order to ensure long-term stability of the watershed’s astounding wild winter steelhead.

Wild steelhead run numbers fluctuate within a given river system due to environmental and fisheries management factors that affect survival of eggs, fry, parr, smolts, and returning adults. The incredible life history diversity and resilience of wild fish helps them weather these periods of lower productivity. That said, it is incumbent upon management agencies and anglers to minimize the barriers to recovery and give these fish the opportunity to rebound when numbers are low.

In 2009 the Skagit spring steelhead fishery was closed after experiencing a historically low run of less than 3000 fish. Numbers quickly improved following the management change. As recently as 2012 – 2017, during the period when Occupy Skagit and others were calling for a reinstatement of the catch-and-release spring season, the watershed was seeing wild winter steelhead returns ranging between approximately 6000 to 9000 fish each year. New fishery management plans were developed and seasons were opened again in 2018 and 2019. Run numbers have declined dramatically since their recent peak in 2014, bottoming out in 2020 with just 3092 fish returning.

A number of factors affecting the basin’s steelhead returns have been in play during recent years. Droughts during the summer of 2015 dried up and warmed important spawning and rearing habitat. As a result, multiple year classes of juvenile wild steelhead suffered huge losses and fewer smolts survived to migrate out to sea. Unfavorable ocean conditions in recent years, like the warm “Blob” in the North Pacific, have contributed to poor survival. (Biologists are seeing similar ocean survival declines on coastal steelhead populations during this same time period). Predation by harbor seals and other pinnipeds in the Salish Sea also takes a large toll each year.

Last year, the Skagit basin was projected to see a return of 3,963 winter steelhead, which is slightly below the threshold required to allow an angling season. In accordance with provisions established under the Endangered Species Act (ESA), the spring Skagit steelhead fishery did not open. This turned out to be a great decision because only 3,092 spawners eventually arrived. Though some margin of error is always to be expected with fish population forecasts, the large discrepancy between pre-season estimates and final counts in 2020 was cause for alarm.

Recognizing the critical need for more accurate pre-season estimates, fishery managers and scientists spent the past year re-tooling and testing the models used to forecast steelhead returns in the Skagit basin. Their updated model is now predicting a return of 4,297 wild winter steelhead this spring. This number is enough to allow a fishery for recreational anglers and tribal co-managers according to the Skagit River Steelhead Fishery Management Plan.

The worry, of course, is that the numbers are low, this revamped model has only been backtested against historical data, and we are not allowing enough of a margin of error for ongoing recovery. To grow steelhead populations, we need as many wild fish to successfully spawn as possible. By opening a season, we guarantee that a number of fish will get killed accidentally by anglers and others will die as bycatch in nets targeting spring chinook. Some wild steelhead will also experience reduced reproductive success after being caught, handled, and released by anglers.

Pre-season run size predictions are notoriously challenging numbers to get correct for any watershed. Opening a fishery is a risk when thresholds are close. Hopefully, this year’s forecast is accurate and we see the predicted improvement. But if the run numbers end up below the forecast, we are only further inhibiting the recovery of Skagit and Sauk wild steelhead populations when they need protection the most.

For years, the spawning goal for the Skagit Basin was 6000 wild steelhead. Within current ESA guidelines established for the watershed, a low-impact wild steelhead fishery is allowed if projected returns are between 4000 and 6000 fish. Higher impacts (harvest and/or accidental mortality) are allowed above projections of 6000 fish, the longstanding escapement number. “Low impact” is defined by a fishery that does not exceed an acceptable mortality rate of ten percent of the returning fish. These mortality impacts are shared between recreational anglers and tribal fisheries.

To keep angler impacts below allowed levels, fishery managers have continued to build upon guidelines established during the 2018 and 2019 Skagit/Sauk catch-and-release seasons. The Skagit will be closed downstream of the Dalles Bridge in Concrete and above the Cascade Road Bridge in Marblemount, leaving the majority of the river as sanctuary. The Sauk is closed above the Sauk Prairie Bridge near Darrington, as is the Suiattle River, an important spawning tributary. The season will end on April 13, weeks earlier than previous years, in order to protect spawning fish in the Skagit and Sauk mainstems.

Most notably, during the upcoming season, fishing will only be allowed four days a week. On the Washington Coast and Olympic Peninsula, a ban on fishing from boats is being used to reduce total angling impacts. In the Skagit basin, fishery managers are opting to completely close the rivers three days each week instead. As required by the current Skagit River Steelhead Fishery Management Plan, teams of workers will be conducting creel surveys and counting anglers each day of the season to document and assess angling impact.

Historically, the Skagit Basin saw returns of around 150,000 wild steelhead annually. We saw runs of approximately 13,000 as recently as the late 80’s and runs of 9000 fish six years ago. This year, we are hoping to have approximately 4300 fish and some anglers in our community are celebrating these numbers because they meet the lowest threshold allowing a season. This mindset and reaction to such a low forecast show how much the baseline has shifted regarding popular expectations for wild fish. With the incredible habitat available in the Skagit, we should collectively aspire to something greater.

We recognize that fishery managers are operating in compliance with existing Federal plans and frameworks, and are making admirable efforts to provide angling opportunities to the public while reducing impacts on precarious steelhead populations. In fact, there are many elements of the Skagit and Sauk catch-and-release season that we would like to see implemented across Washington’s other struggling steelhead watersheds. Having anglers on the water also prevents poaching that might otherwise go unnoticed.

That said, following recent years of deep declines, wild steelhead numbers in the Skagit system are at an unacceptable low point. We are eager to see actual fish counts from spawning surveys and hope that the projected preseason improvement in steelhead numbers is more accurate. We’ll be the first to celebrate if they are, but last year’s terrible run numbers and missed forecast give us pause.

We’ve heard from a number of WSC members who have already decided they don’t feel comfortable fishing this year’s spring season for these reasons. We deeply respect the decision by those anglers foregoing fishing opportunities in an effort to protect the Skagit’s imperiled wild steelhead.

If an angler chooses to fish the Skagit and Sauk this season, it is important they keep the low numbers of wild steelhead forefront in their mind. All anglers should make conscientious decisions to reduce their personal angling impact. This spring would be a great season to stop fishing for the day if you’re lucky enough to encounter one of the Skagit’s treasured wild winter steelhead. Likewise, we also encourage guides to demonstrate similar restraint and leadership when fishing with their clients.

Landing fish quickly, handling them carefully, keeping their gills flushed with water, and releasing them safely are always important practices, but they become especially critical when run counts are low. We need all of these fish to spawn successfully. Handling fish responsibly is not only the ethical thing to do. It is also one of the best things anglers can do to ensure we have these fisheries in the future.

The mighty Skagit is one of our best opportunities to recover wild steelhead in Puget Sound. Though scarred by generations of logging, development and overharvest, high-quality habitat still remains in the basin, especially within the Sauk and Cascade Rivers and a number of spawning tributaries. Much of the watershed, including Illabot Creek, is protected under the Wild and Scenic Rivers Act. Domesticated Chambers Creek hatchery plants have been eliminated to prioritize wild fish recovery and the current hydropower relicensing process could provide additional habitat and migration benefits to the basin.

The Skagit’s strong improvement in run numbers from 2009 to 2014 demonstrates that we can rebuild wild steelhead runs when we take necessary steps to support recovery. Opportunities abound to further strengthen this fishery. We must demand that our elected leaders and resource managers continue to invest in spawning and rearing habitat restoration, like the work being done at Barnaby Slough. Implementing selective commercial fishing methods to reduce bycatch, funding sonar monitoring for real-time management and accurate fish counts, protecting resident rainbow trout from harvest, protecting the headwaters from mining pollution, and better funding game wardens to prevent poaching all benefit wild steelhead. Best of all, this work also supports recovery of salmon and bull trout throughout the watershed.

The Skagit is one of the world’s iconic winter steelhead rivers. It is a massive watershed capable of providing a stronghold for these incredible fish as they fight to survive an uncertain future. Together, we must make every effort to protect and restore it. For anglers, the first crucial step is a commitment to restraint. When wild steelhead numbers are low, we must act with an eye towards the future. The fish we protect today are the ones that will build the runs we get to fish tomorrow.

This article provided by: